“To enter into the mind of God
You may step into my slicing blades and become speachless.
The chatter gone, there is the Silence that always was.” 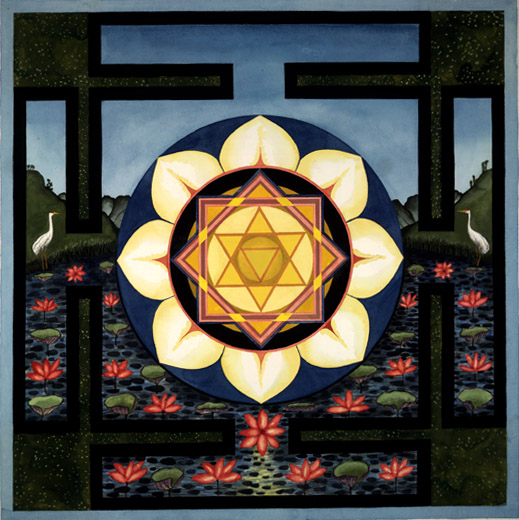 Here is the yantra of the crane-headed goddess, Bagala Mukhi, the stiffler of speech and action. She is said to represent those unconscious tendencies that lead toward the psychic paralysis of illusion. (The divine is to be found even here.) Her iconography often has her dressed all in yellow, seated on a throne in the middle of a sea of nectar, flanked by cranes. She is grasping a demon by the tongue with one hand. This demon has the power to wreak great destruction in the universe by the power of its words. Thus she is called the great immobilizer, and by her force, winds cease, fire turns cold, and anger is appeased. Paradoxically, at the same time she is associated with eloquence. For those yearning to still the chatter of the mind, her quieting force can be brought to bear. In such situations she is a great mentor.