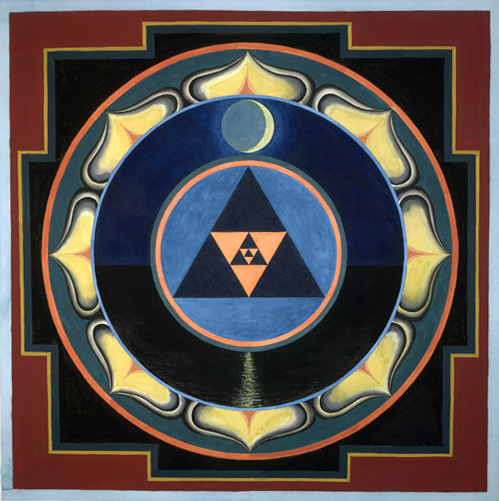 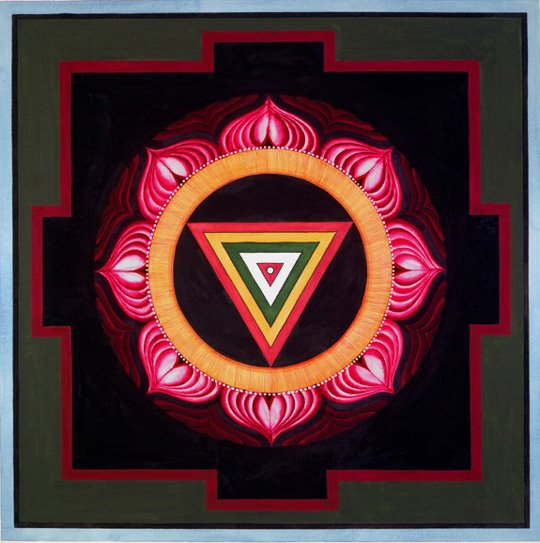 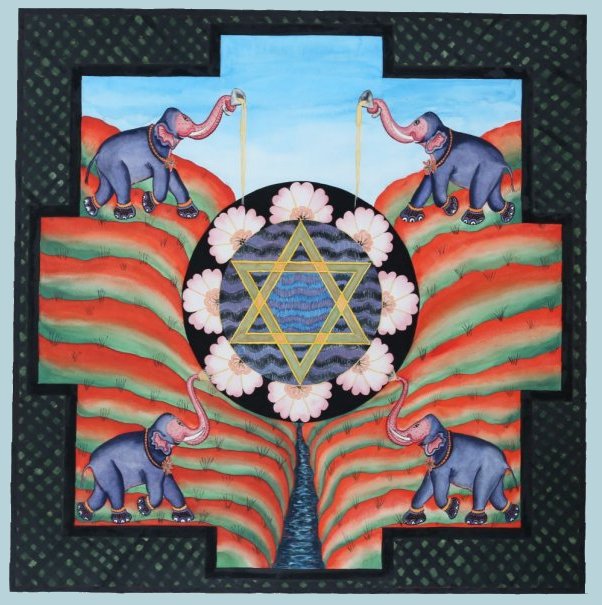 Sri-Laksmi’s birth is said to be the result of the austerities of Prajapati, the great progenitor. Sri is invoked to bring fame and prosperity. She is said to bountiful and to give abundance, and to bestow on her worshiper gold, cattle, horses, and food. She is asked to banish her sister, Alaksmi, “misfortune,” who appears in such inauspicious forms as need, poverty, hunger and thirst. She is delighted by the sounds of elephants. In outward appearance she is glorious and richly ornamented. She is radiant as gold, illustrious like the moon. She is often said to shine like the sun and to be lustrous like fire. She is associated with the lotus which is a symbol of fertility and life. This fertility is rooted in and takes its strength from the primordial waters. The lotus symbolizes vegetative growth that has distilled the life-giving power of the waters into embodied life. It is this lotus-power that is revealed in Sri-Laksmi.

Derived from the writings of David Kinsley, Hindu Goddesses 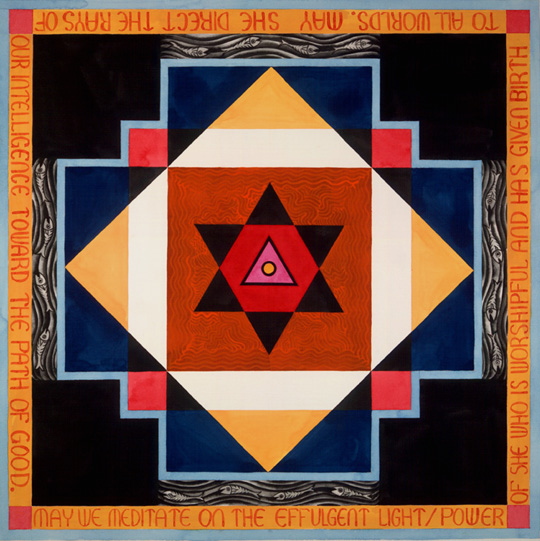 One of the most important longer mantras, commanding great respect since Vedic times, is the Gayatri Mantra. It can be translated as: May we meditate on the effulgent light (or power) of S/He who is worshipful and who has given birth to all worlds. May S/He direct the rays of our intelligence toward the path of good.

Each of the syllables of the expanded mantra is linked with a deity, a color, a bodily mechanism, and a cosmic principle. The mantra is inscribed in a circular fashion, symbolically integrating a whole mantra-picture of the universe with the yantra form. The colors used in this yantra were taken from those linked to the syllables of the mantra. 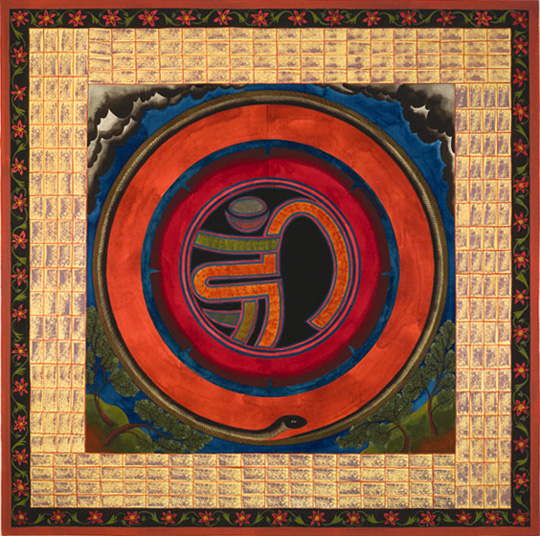 Om Hrim. The sound of Om is the most ancient and potent Hindu mantra. It is the primordial vibration that lights the bindu or Center of existence. One source says that the word Hrim denotes the unity of the male and female principles or all opposition. Others suggest that the H stands for Siva, the R for Prakriti or nature, the I for Maya or creative play, the M for the dispeller of sorrow. Hrim is also the seed mantra of the goddesses Tripura-Sundari, and Tripura- Bhuvanesvari, two of the Mahavidyas presented elsewhere in these pages. 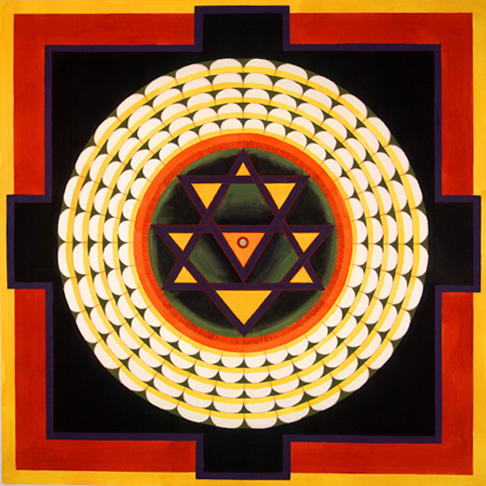 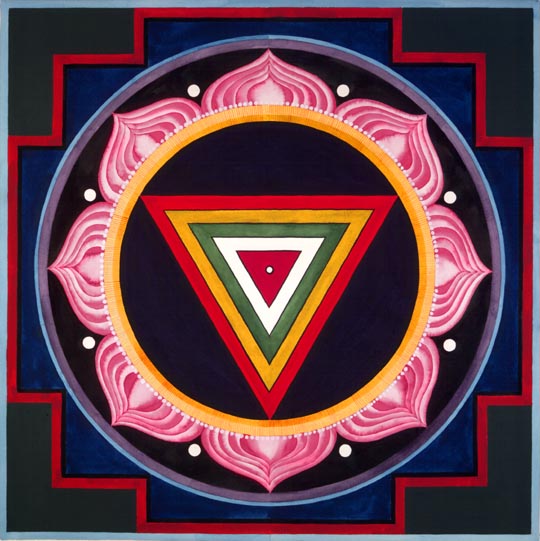 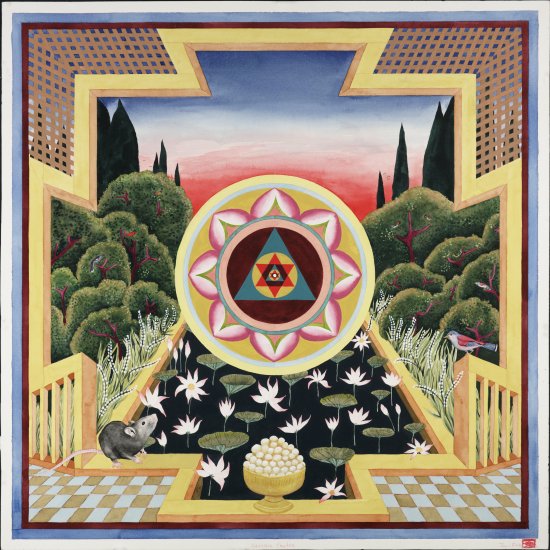 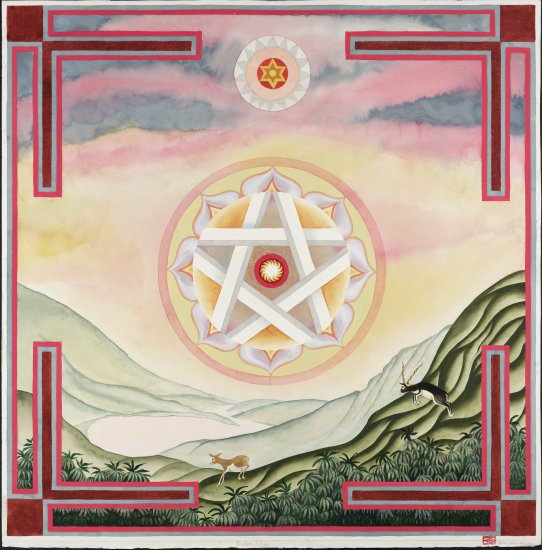 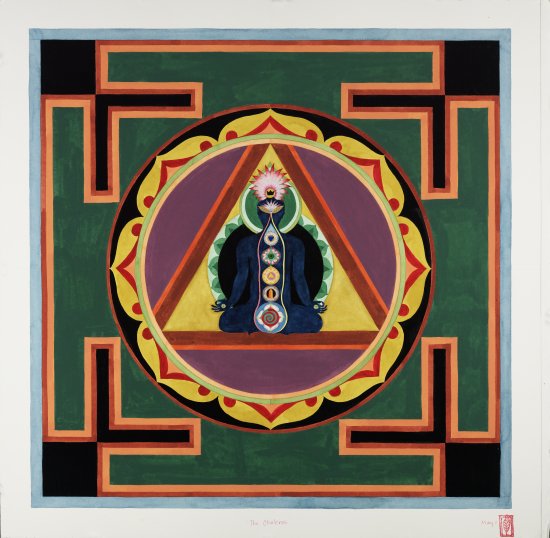 The practice of meditation, realizing and using the energy centers of the body, has evolved from remotest antiquity. There are symbols in the vast natural caves of Paleolithic Europe (c. 20,000 BC) which can be accurately matched with symbols still used today by those involved with Tantric meditation and practice. This yantra was created after studying a number of paintings of the chakras from various centuries. They were made to aid the practitioner by expressly stimulating a special kind of mental activity, and to evoke psychosomatic energetic forces. To look at this image meditatively is to bring forth an esoteric sense of who one truly is, and what is possible. “Tantra has always believed that our failure to grasp time lies at the room of all other human failures. To see the nature of time is to understand the process of Genesis, that ladder of descending stages from the Origin through the evolution of the cosmos. Once we grasp that, we can, so to speak, reverse the machine for ourselves, and climb back up the ladder of Genesis. To reach that summit of intuition Tantra holds to be the worthwhile goal.”